How to take a taxi from JFK Airport

Taxi is the quickest and easiest way to get from JFK to anywhere in Manhattan. It’s also the most iconic. We cover other options, of course, but enough people come to NYC with a little anxiety about hailing a yellow cab that we felt it deserves a post of its own.

We’ve seen a few other sites with brief instructions, but to ease your stress, this tutorial comes with photos from each terminal.

Finding the taxi stand at JFK

Terminal 1 serves Air France, Japan Airlines, Korean Air and Lufthansa. The taxi stand from JFK Terminal 1 is directly outside of the baggage claim area.  The arrivals area is not very big and the signs for the taxi are very large. 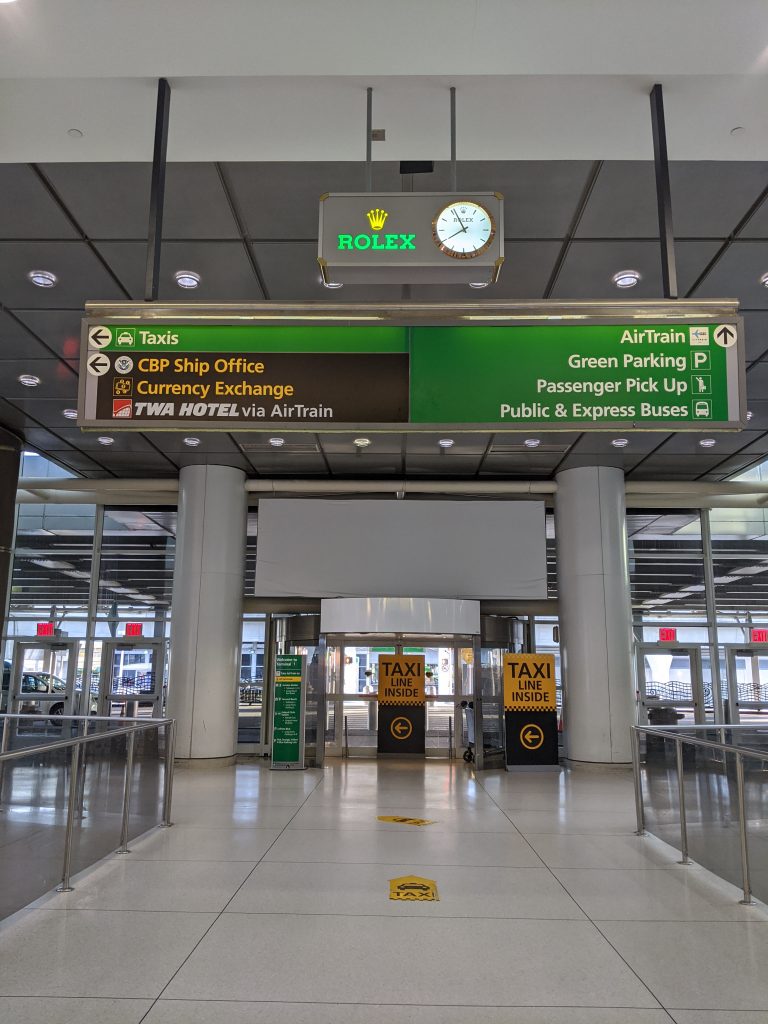 Terminal 2 is the Delta terminal and is even smaller than Terminal 1. The sign for the Taxi stand is directly overhead the doors to the exit and will nearly slap you in the face.

When you walk outside, the taxi stand is immediately on your right.

Terminal 4 is the largest international terminal at JFK serving Aeromexico, Air India, China Airlines, El Al, Singapore Air, Etihad, Avianca, Uzbekistan Airlines, Virgin Atlantic, etc. Depending on which baggage carousel you use, when you exit the baggage claim area, the taxi stand will either be straight ahead or to your right. Either way, again it is very difficult to miss. 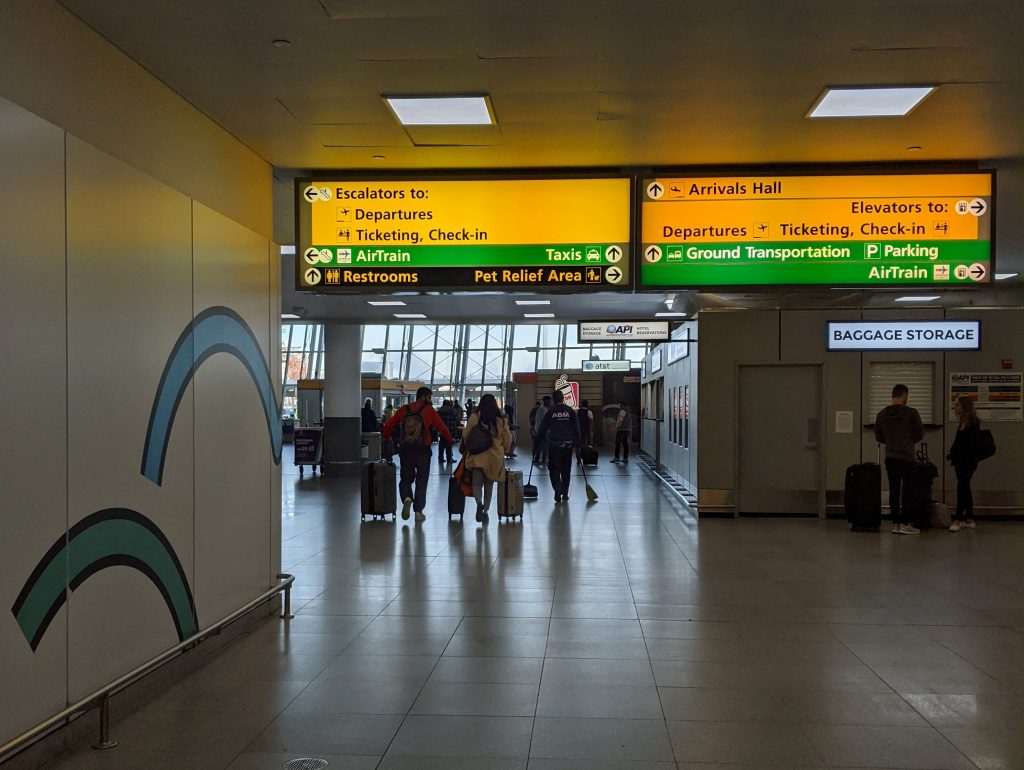 Terminal 5 is primarily served by Jet Blue, Aer Lingus, Cape Air, TAP Portugal, and Hawaiian Airlines. Finding the taxi at Terminal 5 is actually a little more challenging than other terminals, but the concept is the same. The first thing to look out for outside of the baggage claim area is the sign overhead. (apologies for the glare on my photo). From there, you go up an escalator, down a walkway, and then down an elevator to the taxi stand.  Photos below. 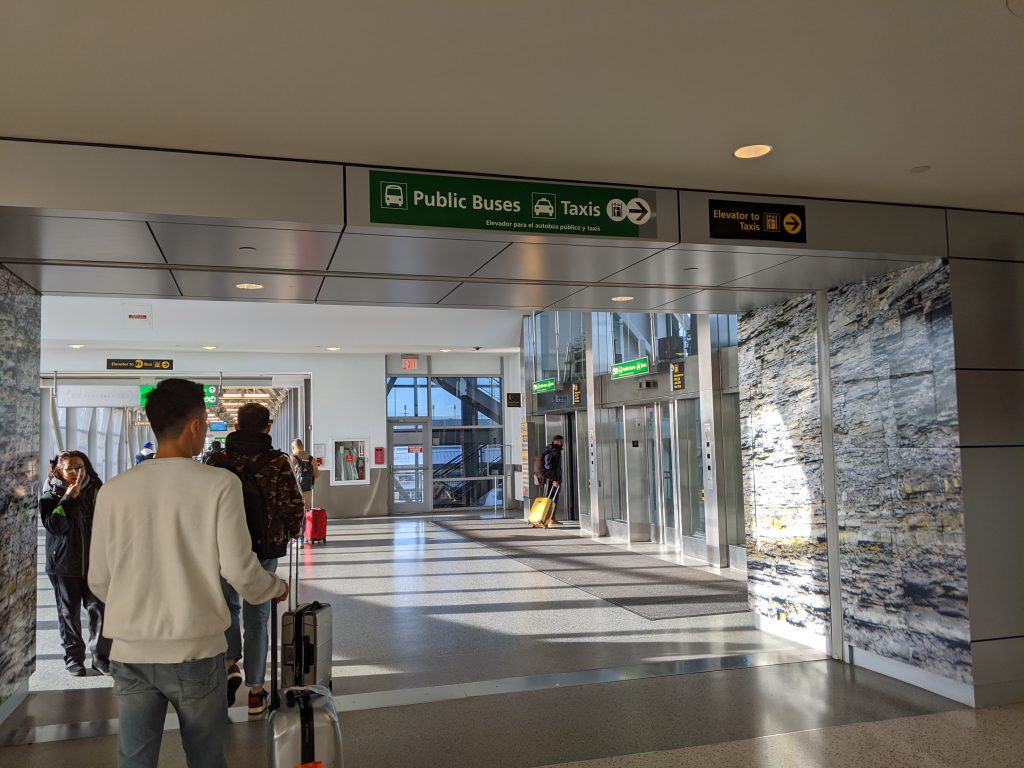 Terminal 7 serves Alaska Airlines, British Airways, Eurowings, Iberia, Iceland Air, LOT, Norwegian Air, and Ukraine International Airlines.  Finding the taxi stand here is also easy as long as you can read signs.  When you exit baggage claim, turn right and smack in front of you is a sign for the taxi stand.  It can be a little misleading because the sign is directly above the door so it is tempting to go out the door, but notice the arrow to the right.  Follow the arrow.

Terminal 8 serves American Airlines, Cathay Pacific, Ethiopian Airlines, Finnair, Qantas, Qatar Airways, and Royal Jordanian. The terminal serves both domestic and international arrivals, but the taxi stand is in the same place for both. When arriving on a domestic arrival, as you exit baggage claim, follow the sign out the door to the right. For international arrivals, the route to the taxi stand is straight ahead. Terminal 8 is unique in that this is the only taxi stand where you have to cross the street to get to the stand, but as with everywhere else, just follow the sign, or look for the huge line up of taxis. Just be sure to check in at the booth where they will assign you a cab. To get to the booth, it currently is a little wonky where you have to kind of walk around the passenger pick up and back into the gate towards the stand. 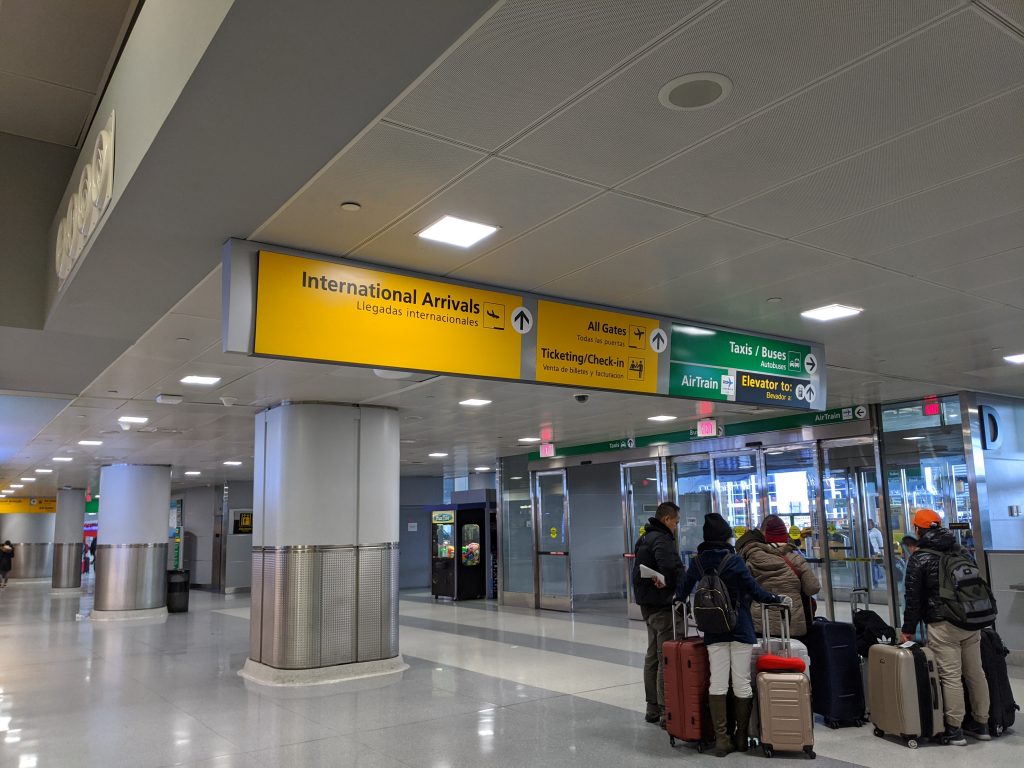 One quick note is you should only hail a taxi from a taxi stand at the airport. There may be drivers offering limo service as you exit baggage claim. Ignore these people. Navigating to the Taxi stand is pretty easy otherwise.

What does a taxi stand look like at JFK

At every terminal, after following the huge signs on where to find the taxi stand you will find well-defined queues. Below is an example of what a taxi queue looks like.

When you approach the taxi stand, the agent will ask you where you are going. You can say Manhattan or Midtown or Times Square to the agent without giving a specific street address. You can also say Brooklyn or Queens or the Bronx if you’re not going to Manhattan. All they are looking for is if you should be charged the flat rate or not and then to generally give the driver an idea of where you are going. At this point, they will print out a ticket and tell you what taxi is yours. You can see in the image above the taxis are parked in front of TAXI 1, TAXI 2, TAXI 3 painted on the sidewalk. You can go stand where the agent tells you and the driver will take the ticket and you’ll be on your way.

Cost of a taxi from JFK to Manhattan

Taxis from JFK to anywhere in Manhattan, including Midtown, Port Authority, and Times Square, charge a flat fee of $52.00 during off-peak hours. During peak hours there is a $4.50 surcharge, which includes 4-8 pm on weekdays.

There is also a $0.50 state tax added to the bill and tipping is generally expected. I will usually tip between $10 and $15 for a trip from the airport, but otherwise around 15%.

Cost of a taxi from JFK anywhere but Manhattan

What to say to your taxi driver

Once you are in the cab, the driver will ask you where you are going and at this point, it’s best to say your hotel name or a cross street. For example, you might say, “I’m going to the Knickerbocker Hotel in Midtown.” or “I’m going to the Crowne Plaza in Times Square.” Taxi drivers will usually know all of the popular hotels, but will occasionally need a cross street so it’s good to know this in advance. A conversation may go like this:

Me: I’m going to the Moxy Hotel in Times Square.

If you see the driver has a GPS, you can give them the exact address as well.

Other notes about a taxi from JFK to Manhattan

Four passengers are the limit for NYC taxi cabs, but minivans will allow 5. There is no standard make and model of a taxi cab, but yellow cabs are the only cabs allowed to pick up from JFK. You may also see light green cabs, known as boro cabs, in the city. These boro cabs are only allowed to pick up in the outer boroughs, hence the creative name.