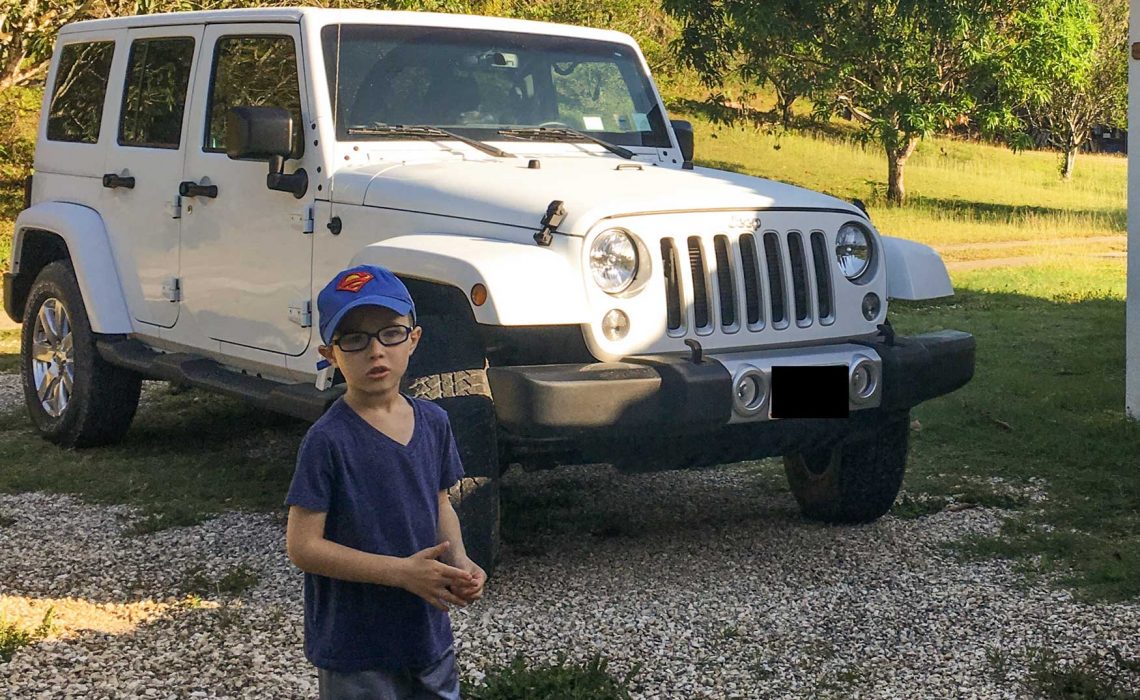 Costa Rica is a bucket list destination for many and land of endless beauty. It has a dramatic ecosystem that spans lush cloud forests in the mountains, an active volcano, and stunning beaches on both the east and the west. While a prearranged tour will surely get you from point to point, having the flexibility to pull over to peer over at the alligators under the bridge or extend your conversation with the local Tico at the corner soda really enhances the experience. The only way to really embrace a Costa Rican immersion with your toddler is by renting a car.

Add into the mix wanting absolute safety for your little ones and the peace of mind having your own car seat or at least taking the time to install a rental properly, really makes renting a car an attractive way to navigate.

As season travelers having rented a car in three continents, renting a car in Costa Rica did not intimidate us, but we did do our research. Now that you’ve achieved baby’s first flight, let’s tackle that rental car abroad.

Basics: What you’ll need to rent a car in Costa Rica

Let’s get this one out of the way right out of the gates. When we visited and rented a car in Costa Rica we had three small children, ages 5, 3, and 4 months.

Because we did not want to compromise safety with the baby at all, we brought our own infant car seat. The little guy’s muscle development was not sufficient to be put in an ill-fitted car seat. Knowing even a minor bump or swerve could be dangerous, we supplied our own.

Up until our kids are old enough and developmentally ready for a forward-facing car seat, we generally will bring our own. Even at age 2, when the AAP gives the okay for kiddos to face forward, we will call a rental company and confirm they have the appropriate car seat on hand and try to reserve a specific seat, if possible.

Note that child seats are required for children under 12 or smaller than 4’9″ (1.45 meters). Children not using a child seat can result in a fine of approximately $400.00.

As for the older dudes, we rented car seats from the rental agency. Most rental car companies anywhere in the world will offer car seats for toddlers and in Costa Rica, this is no different.

Once on the road, I stuck to the same defensive driving techniques I employ in the U.S.A. There are off-road experiences that many choose to explore that may require 4 wheel drive, we stayed on the main roads and had smooth driving our entire visit. On our next trip to Costa Rica when the kids are older, we will take our adventurous spirit to the next level, but for 4 days we had plenty to experience without going off-road.

As previously mentioned 95% of the roads in Costa Rica are well paved and well-trafficked. We did encounter the driveway at our Airbnb was heavy gravel and a steep incline for about 20 feet, but even with that, we did not need to use 4 wheel drive. There are more remote locations where you may encounter potholes or stream crossings so we recommend anything with a high clearance just in case. There’s no need to splurge though and rent a car in Costa Rica that is capable of navigating lunar terrain.

If you have a cell phone with unlimited data and an international plan, chances are your phone will work for renting a car in Costa Rica. We use Verizon on a Google Pixel. Our coastal AirBnB was a bit off the beaten path, several of the final streets leading to the final destination had no signage, but GPS on my phone got us there no problem. That said, as I mentioned previously, we did not stray too far from major roads or cities with the kids. I cannot speak to cell signal quality in more remote areas of the country. Also, note that GPS uses satellite signals for positioning but it uses a data connection for the maps and routing. This will incur data usage fees so be careful.

Finally, when renting a car in any foreign country in addition to making sure we have some sort of GPS signal, we always recommend picking up a paper map from your rental agency. You never know when a storm or poor signal will ruin your GPS quality.

Hidden fees often come up as a major concern when renting a car in Costa Rica. Some sites cite a 13% airport tax from rental agencies, which we did find at some of the smaller Costa Rican rental car agencies. The problem is that there are no rental car agencies actually at SJO, the international airport that everybody flies into. As a result, the rental agencies charge a fee to drive you to their depot. If you see a great rate online, it’s fair to have a healthy dose of suspicion. We called the local office and confirmed that the rate quoted online covered all fees and we would not be charged anything additional on arrival.

The one thing I was unable to get out of, however, was insurance. The total fee was still less than other quotes, and since I knew what we were going to pay ahead of time, I rolled with it and had no other problems. I argued that the insurance from our credit card would suffice, but even with Avis, they wouldn’t let me rent without additional insurance. We found out after the fact that there are some agencies that will allow you to decline insurance if you put a $1500 hold on your card. We didn’t find that but call ahead.

This is an easy one. Most rental car companies in Costa Rica accept an American driver’s license, which is what we used. If you’re not American, or if you’d like to play it safe, you can pick up an International Driving Permit at your local AAA. An international driver’s permit is nothing more than a translation of the permit from your home country. At AAA, you do not need to be a member. It costs $20.00 and requires two passport photos, which they also take on-site for an additional $15.00. The process takes about 3 minutes.

One thing we highly recommend when renting a car in Costa Rica is the Roadside Assistance. I never purchased this in the past, but after doing my research, I went with it and we ended up using it twice. For us, the car battery died. This is apparently common due to the combination of tropical heat and the saltwater breeze. After the first time, the rental company came and gave us a jump. After the second time, they came out and swapped the battery. For AAA members, you can also check to see if your membership includes the same benefits abroad. For us, it was just easier to pay the extra $15.00 and have the local number handy.

Other than that, know that 911 works in Costa Rica so there is no need to memorize local police or other emergency numbers.